This time of year lends itself to cosy evenings curled up under the duvet with a book or e-reader, immersing yourself in wonderful fictitious worlds. One of my all time favourite stories is A CHRISTMAS CAROL by Charles Dickens – combining Christmas and ghosts, and written by the master himself, it does rather tick all the right boxes. Proving it’s not only the classics offering fabulous festive reads, over the next five days I’m going to be sharing and recommending some excellent Christmas books by current authors. 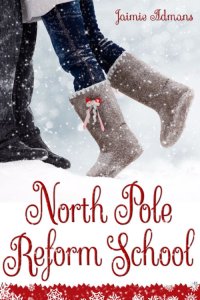 Mistletoe Bell hates Christmas. So would you if you had a name like hers. Her Christmas-mad parents make the festive season last all year, and with another Christmas looming, Mis doesn’t think she can take any more. After her carelessness causes an accident at school, it seems like things can’t get any worse.

Then she wakes up to find The Ghost of Christmases Ruined in her bedroom.

She is taken to the North Pole, to a reform school run by elves determined to make her love Christmas. Stuck in a misfit group of fellow Christmas-haters with a motley crew of the weird and even weirder, watched over by elves day and night, she doesn’t expect to meet cute and funny Luke, who is hiding a vulnerable side beneath his sarcastic exterior. She doesn’t expect to fall in love with him.

But all is not as it should be at the North Pole. A certain Mr Claus is making the elves’ lives a misery, and pretty soon Mistletoe and Luke are doing more than just learning to like Christmas.

A YA romantic comedy in which Santa is the bad guy, teaching reindeer to fly is on the curriculum, and zombies have a fondness for Christmas music.

Jaimie has given me an excerpt from NORTH POLE REFORM SCHOOL to share with you. Enjoy!

I’m still looking around for a weapon when two people walk in.

No, they can’t be elves just because they’re small and dainty and wearing red and green outfits. And they have pointy ears. A little bit like Luke’s, actually.

“Good morning, everyone,” the female one says way too cheerfully. “What a lovely day. It’s so nice to meet you all. I am Elf Tinsel, and this is my husband, Elf Navidad.”

“Hello.” Elf Navidad waves enthusiastically. “Remember, there’s no point in closing the stable door if the horse is wearing spectacles.”

“Welcome to North Pole Reform School. Now, I’m sure you’re all wondering what’s going on here, and we have come to tell you. If you’ll just… wait…” She consults a clipboard in her arms. “There’s one missing, Navi. Have any of you seen another one?”

“Another one of what?” Luke asks.

“One of you,” Tinsel says. She counts us with a pen. “Yes, there are only four. There are supposed to be five. Have any of you seen the other one?”

We all shake our heads in bewilderment.

“Go and see if you can rouse him would you, Navi dear?”

Navidad walks over to one of the other doors and goes inside.

“Now, the rest of you, we’ve brought some clothes for you to wear, and we’ll need you to put them on before we can get started, and—”

Navidad comes back out. “Bit of a problem, Tinsel. He appears to think he’s dead.” He says it in what is supposed to be a whisper to his wife but we can all hear him.

“You know we can hear you, right?” Luke asks.

Navidad turns to him. “Then you won’t mind helping. Be a pal and go and convince the little boy in there that he isn’t dead.”

Luke shrugs. “Maybe he is dead. Maybe we all are.”

“You’re not dead,” Tinsel says. “None of you are dead. As I was trying to get to, this is the North Pole Reform School. You’re in Santa’s Village at the North Pole, and you’re all here to learn a very important lesson. But we can’t start without everyone being here.”

“What, Elf Boy? Why’d you have ears like theirs? Why do you have elf ears? Something you want to tell us?” Joe questions Luke.

“No, okay?” Luke frantically tries to smooth his hair over his ears again. “No, I have nothing to tell anyone. Nothing.”

“Please don’t fight,” Tinsel interrupts. “I will explain everything just as soon as I sort the fifth student out. All stay here, please.”

Tinsel walks over and goes into the room Navidad just came out of. We all go over to crowd around the door and look in. Even Duck Lady has got off the sofa and joined us.

The small room looks the same as the one I woke up in. A small window on one wall, a couple of feet of space between that and the bed. In the corner of this room is a boy, cowering on the floor, the sheet from the bed wrapped around himself and clutched to his chest. Tinsel is crouched in front of him, talking gently. We hear her telling him he is safe and nothing bad will happen to him.

“Let me help,” Duck Lady says and pushes herself into the room with the boy and the elf.

Even as I think it, I can’t believe I’m taking this seriously. Elves don’t exist. Santa and his village in the North Pole don’t exist. And yet here I am, watching an elf try to cajole a little boy into believing he isn’t dead.

Luke is squashed in the doorway next to me and I can’t help but look up at him. He really does have the same ears as Tinsel and Navidad. He must sense me looking because he glances down and winks at me. I can’t help but smile back.

Now Duck Lady is crouched in front of the boy too, and Tinsel seems to have taken a step back. Maybe Duck Lady has gone to tell him he’s being watched by ducks; no doubt that will make him feel better.

I first discovered Jaimie, and her hilarious, off-beat  Christmas story THE NORTH POLE REFORM SCHOOL, when she was interviewed on Dan Thompson’s blog. Click here to read the interview. Although NORTH POLE REFORM SCHOOL is aimed at the teenage market, adults can enjoy it too – I know because I loved it. Jaimie’s quirky sense of humour is fabulous – a woman terrified of ducks, a lead female character called ‘Mistletoe’, a lead male with elf ancestry, and the biggest danger at the North Pole being zombies, not polar bears! NORTH POLE REFORM SCHOOL will have you laughing out loud with its sanctimonious elves; irreverent, and somewhat reluctant, pupils; the least jolly Santa ever, and an ending that unashamedly celebrates the joy of Christmas. My favourite scene? Teaching the baby reindeer to fly. It’s beautiful.