And then the witching hour arrived, the sensible went home and only five hard core drinkers with livers of steel remained. Our mission, which we very much cared to accept, was to locate an establishment willing to serve us more BOOZE.

We found what we wanted in a place which, at first sight, appeared to be my idea of Hell: a loud club/pub with bouncers on the door and a queue of people half my age waiting to get in. I hesitated, looking horrified, mumbling ‘In there? Really?’ and other assorted expressions of disbelief, until the bouncers, recognising us as a cut above the amateur drinkers in the queue, lifted the rope and waved us in.

Did we have a good time ‘in da club’? Damn right we did! Reluctance forgotten, I was at the bar like a shot, elbowing the children out of the way and waving my money at the ridiculously young bar staff. A guy waiting to be served alongside me turned to me and asked if I wanted a cup of tea. Cheeky sod! Had I been able to stop laughing I’d probably have informed him that I was a seasoned drinker before he was even a twinkle in his daddy’s eye!

By the time I’d secured a pot of tea – I mean, a round of drinks – my friends had all turned into Beyoncé. We shook our booties, telling the clearly impressed youngsters milling around that if they liked our finger, they should have put a ring on it. 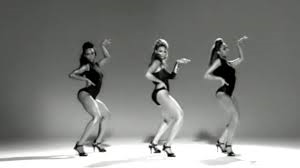 Damn, we were sexy – no, honestly we were. I know, you see, because I pulled!

This is what happened: without warning, Felicity-Beyoncé stopped dancing, grabbed Rose-Beyoncé and pulled her out of the line of fire, leaving me exposed to the attentions of Bedford’s very own Lothario. My Beyoncé alter ego deserted me in a flash as my brain engaged mouth, and mouth said: ‘NO!’

Lothario didn’t get it. After all, ‘No’ is a bit ambiguous, isn’t it! So I tried something along the lines of ‘Seriously, mate, if you value you genitalia, LEAVE ME ALONE.’

After making an unsuccessful grab for Rose, Lothario threw in the towel and moved on to easier prey, leaving the Beyoncés doubled up with laughter. Then we decided it was time to get down to some serious partying and move on to the dance pole.

Felicity, amazingly still steady in her killer heels, went next. I looked away for a second, and when I turned back Rose had climbed the pole. Blink. Rub eyes. Squint. Yes, Rose was at the top of the pole, apparently sitting on Felicity’s and Marilyn’s shoulders. What a great photo opportunity. Perhaps I should grab my camera.

By the time the idea had lodged in my soaked brain and I’d located my bag, found my phone and remembered how to work the camera app (succeeding only in photographing my fingers), the girls had given up and were standing behind me.

‘You were faffing, Ali.’

I attempted to reason with them. ‘Go back and recreate the pose? Yes?’

Altogether now, three speaking as one: ‘No!’

It was at this point that the aptly named Calamity Jane decided she wasn’t going to be outdone in the dancing stakes. Swinging her leg up as high as she could, she attempted to land it on the shelf holding our drinks, bags and other girls’-night-out paraphernalia, succeeding only in toppling over spectacularly and bouncing off her back. We gave a collective gasp until Jane got up and announced she needed another beer. As long as she was drinking, she was OK – so we laughed.

And laughed until it hurt and our makeup was running with tears, then we laughed a bit more.

Here’s to the next ladies’ night. Bedford, can you handle us?

It wasn’t difficult to choose a song to accompany this post:

One thought on “In Da Club”