I’m delighted to say I’ve started 2014 in a very positive frame of mind – well, once I got over the raging New Year’s Day hangover, that is! My editing website is gradually being tweaked into shape, and I’m finishing work for the authors who so kindly donated their manuscripts to help me hone my editing skills. Once that’s done, and more lovely manuscripts come rolling in for editing, then Alison’s Editing Service will be officially launched.

You may remember that I had a stall at the Mill Road Winter Fair last month, where I met a group of lively youngsters giving away copies of local magazine Cambridge Edition. Well, today I fired off a tweet to them, and within minutes was invited to get in touch and organise an interview to feature in a future issue. 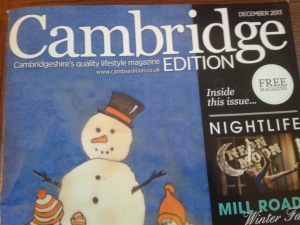 More information on that once it’s arranged, because I have some super exciting news, and this one’s a definite…

I’m going to be on the radio on Monday! Yes – Sue Dougan at BBC Radio Cambridgeshire has invited me to give an interview on her lunchtime show, and I am very excited about that.

Oh, chirpy-chirpy cheat-cheat – rolling three advent calendar blogs into one! My excuse? One very hectic weekend, about which I have mixed emotions. Unusually for me I may actually bare my soul a little during the course of this blog, so be warned. It could get emotional…

Donkey Common marquee on the right.

Saturday 7 December was Mill Road Winter Fair in Cambridge, and I was delighted to secure a stall at this hugely popular event. By Saturday morning I was also very nervous, mainly about the logistics of transporting one hundred hardback books, sweets (for unashamed bribery), Christmassy bits to send out a subliminal message that books make excellent gifts, and all the paraphernalia I’d decided I’d need to get me through the day. Luckily, with the help of my taxi driver partner and a robust sack barrow, the transportation process was relatively painless, despite the fact I failed to notice my stall right next to the entrance, and therefore had wheeled my heavy load from one end of the marquee to the other and back before I found it.

With my stall set up an hour before the fair began I had time to relax. While stall holders arrived in an increasing state of panic the closer we got to the fair’s grand opening parade, I had a stroll around, cup of coffee in hand, to have a look at everything else on offer. I’m glad I took this opportunity, as I certainly didn’t get another one once the fair began.

Setting up the marquee

As 10.30 approached I heard the opening parade heralding the start of the fair, and people started to arrive in their droves. It was only then that an unwelcome thought wormed its way into my head.

What If I didn’t sell one single copy?

My stall was sandwiched between a group of lively youngsters giving out free copies of local magazine Cambridge Edition, and a lady called Chloe selling slippers from Nepal. That’s what I love about fairs: the wares on sale are so random. Naturally the free magazines proved very popular, and possibly my biggest success of the day was an invitation to be featured in a future edition. My books didn’t fare so well. To begin with I had difficulty even giving my sweets away, as a gift wrapping service at the entrance was getting in first, so people were already munching on chocolate by the time they reached me. Remembering the advice of fellow Book Guild author Ian Johnson, I mingled as much as possible in the crowded marquee, offering my sweets and chatting to people about Dory’s Avengers, but it took almost and hour and a half to actually sell a copy.

Chloe was doing a lot better than I was; her slippers were proving very popular. I comforted myself with the thought that perhaps people didn’t want to carry a book while they were browsing, and would return later on to buys loads. Yeah, right! Book sales (or lack thereof) aside, I had a wonderful day at the fair. Chloe was good company, and the Cambridge Edition people were hilarious, competing with the Citizens Advice Bureau to see how many of their helium balloons would end up clinging to the roof of the marquee. Sadly the helium ran out long before the end of the fair, so the ‘Silly Voices’ fest we’d planned for later in the day never materialised.

The fair in full swing

By lunch time the fair was in full swing, I’d sold a couple more copies of Dory’s Avengers and was beginning to really enjoy myself. There was plenty to watch, and plenty to amuse. Just outside the marquee was a children’s climbing frame, which had a fully-grown adult bloke hanging from it every time I glanced that way. One little girl came up to my stall, looked at the sweets, noticed at the ‘£10 a copy’ sign, and walked away looking rather disappointed. A couple of minutes later she returned, £10 note in hand, and asked if she could buy a sweet. The expression on her face when I told her the sweets were free was priceless. 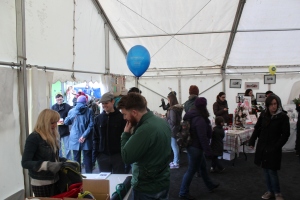 Cambridge Edition clearing up before heading to the pub.

A good hour before the fair ended the Cambridge Edition people had given away all of their magazines, and the balloons (apart from the group on the ceiling), so were heading to the pub. By this time I was very cold and a little disheartened, having only sold five copies of Dory’s Avengers despite my best efforts, so when the Cambridge Edition people invited me to join them I was dangerously close to abandoning my stock and accepting the invitation. Instead I stayed with Chloe, both of us starting to zone out a little after five hours running our stalls. It took all my will power to stop myself starting glassily at people as they arrived – would you buy a book from a zombied out author who never blinks?

Well, some people would as it turned out. The final hour of the day was by far the most successful for me, and by the time the drum beats of the Fair’s closing parade sounded from Mill Road I’d sold a whopping – nine copies. I’d also claimed possession of a free ‘Jimmy’s‘ calendar and an abandoned Cambridge Edition balloon. Once I’d packed away my stall, said my farewells to Chloe and her sister, done battle with Christmas shoppers and parked bikes, and rendezvoused with Andy I was shattered, and gasping for a beer.

Beer won the day. Sunday morning I awoke severely hungover and too sick to attend Cambridge United‘s FA Cup game against Sheffield United. Cambridge lost 2-0 which didn’t improve my mood, but my day got worse. I made the mistake of going on Facebook – I always seem to see something deflating on Facebook when I’d feeling pretty disconsolate anyway.

I had stood in the cold for six hours on Saturday 7 December to sell nine copies of my debut novel Dory’s Avengers.

The author whose advice prompted me to mingle with my potential customers spent two hours on the same day in the York branch of Waterstones, and sold ninety-five copies of his book. I’d love to be magnanimous. I’d love to lift my head and say I’m pleased for him; after all his novel, The Witcher Keys, deserves every success. However, the truth is I read his jubilant Facebook post, sank my head into my hands and cried.

Live and learn, as wise folk say. My next book is going to be so… damn… marketable!

Advent calendar picture day seven: Mary and Joseph on their way to Bethlehem.

Advent calendar picture day nine, and antidote to my sombre mood: The running reindeer huffing clouds of steam from his nose. Hah!

There he is. Huff huff. Ha ha…

Anthony Vicino Hangs Around These Parts