Those of you familiar with my Monday Moans will know that they are usually light hearted pops at the little things that irritate from time to time. Nothing major; nothing important. I hope I haven’t lulled you into a sense of security too much, as today’s post is somewhat different. The subject of today’s moan is something about which I feel very strongly, and as such it’s going to be an unusually serious post. Perhaps I should have waited until tomorrow and called it ‘The Tuesday Tirade’, because this post has the potential to turn into a full blown rant.

Years ago, I regularly used to listen to a radio breakfast show. One of the features on this show aired listeners’ stories about some misdemeanour in their past to which they now wanted to confess. The stories (like my Monday Moan) were meant to be light hearted and designed to amuse, and confessions along the lines of ‘I painted my brother’s bike pink and blamed the milkman’ or ‘I ate all my mum’s prized strawberries and blamed the postman’ usually had the desired effect.

However, if the introduction involved an animal I knew that, far from making me chuckle, the story was going to make me 1/ seethe, and 2/ very upset. You see, the animal was inevitably going to meet an unpleasant, certainly painful, probably terrifying and simply NOT FUNNY death as the story progressed. Call me simple, but I cannot for the life of me see ANYTHING funny about the suffering and death of any creature. Furthermore, I think the portrayal of animal suffering as funny is irresponsible in the extreme. There are people in this world who will pick up on the idea that eating their sister’s goldfish or standing on their boyfriend’s hamster is supposedly hilarious, and will set out to impress their equally moronic mates by inflicting pain, suffering and premature death on a helpless creature.

Now, I appreciate not everybody loves animals as I do. However, whether or not you like animals they share our planet, they are essential to

nature and they deserve our respect. I’m reading a book at the moment, which on the whole is a good book, but I was very upset by a flippant, throwaway line about a cat being locked in a shed full of savage dogs. The tone of the writing suggested to me that at worst the reader should shake his or her head at this, maybe tut a bit then, wearing a wry smile, carry on reading. That didn’t happen with me. Instead, I stared frantically at the words for a while as I tried to rid my mind of horrific, unwelcome images of a defenceless, terrified cat being…

You get the picture, I’m sure. Cruelty and suffering are not things I find amusing. If the book had told of a baby being left at the mercy of the savage dogs everyone would be (quite rightly) horrified, so why is it ok, funny even, to treat a cat so appallingly?

‘Oh, well I hate cats. Cats torture and kill small animals for fun,’ another might say. I’ve two replies to that:

1/ Not all cats hunt and kill small animals. I’ve had the privilege of sharing my home with six different cats over the years, and only one’s been a hunter. He’s merely acting on his instincts; he doesn’t realise he’s being cruel.

2/ Not all humans torture and kill animals for fun, but some do. Unlike cats, humans have the capacity to understand that torturing a helpless creature is cruel, cowardly and despicable, but they do it anyway.

To be fair, most people do tend to react with horror when an animal victim of cruelty is a cat or dog. The radio breakfast show stories never involved either of these popular pets, but time and again I heard about the sad demise of mice, hamsters, guinea pigs, and all manner of birds and fish. The radio show in question was on for everyone to listen to at work, so short of running, screaming, to the toilet with my hands clapped over my ears I couldn’t get away from hearing. Yes, I did write to the producers of the show, interceding on behalf of small animals being sacrificed the length and breadth of the UK in the name of entertainment, but to no avail. The DJ has long since moved on to pastures new, and I can only hope that no small animals are being harmed in the making of his show these days.

Perhaps the day will come when everyone realises that suffering and cruelty are NEVER funny things. In the meantime, I’m going to do what I always do to counter the fury I feel about cruelty to animals: I’m going to find my cats and tell them how much I love them. 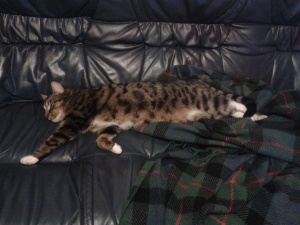